The Genius of Working Less 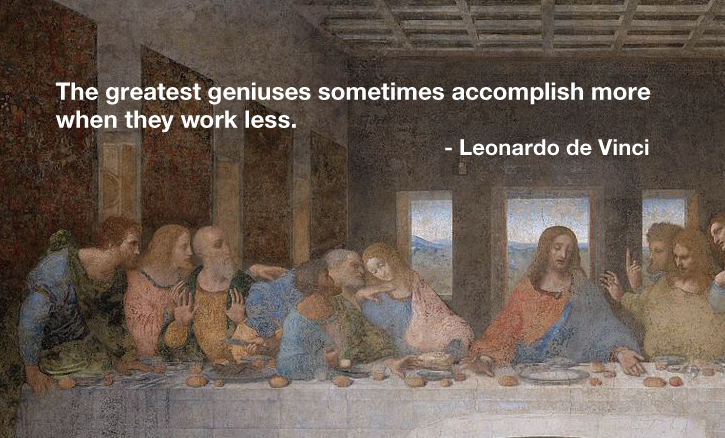 The story goes (as told by Dan Miller, quoting this book), that while Leonardo da Vinci was painting The Last Supper, he would spend many long days painting atop his scaffold, then would disappear for several days without warning. The prior of Santa Maria delle Grazie, who’d hired da Vinci, tried to convince the painter to continue with his work, to not lay down his brush. Da Vinci countered by saying that “the greatest geniuses sometimes accomplish more when they work less.”

History would suggest that da Vinci might have been onto something.

I’ve often tried to convince myself of the virtues of worker harder and longer, resting less. There’s always more to be done, and “asap”. Despite the advice of friends and family, I’ve often tried to push through, enjoying the feeling responsibility and fearing the label of laziness.

It seems that rest is truly an act of faith. Trusting that by not working, the work will actually get done faster and better in the long run. That laying down the brush will produce a better painting. That the end of the marathon will go better if I pace myself in the beginning.

Here’s to taking the leap.