The Essential Art of Working in the Shadows

My friend Elena recently shared James Tissot’s “The Anxiety of Saint Joseph” as part of an Advent reflection, and the painting immediately resonated. 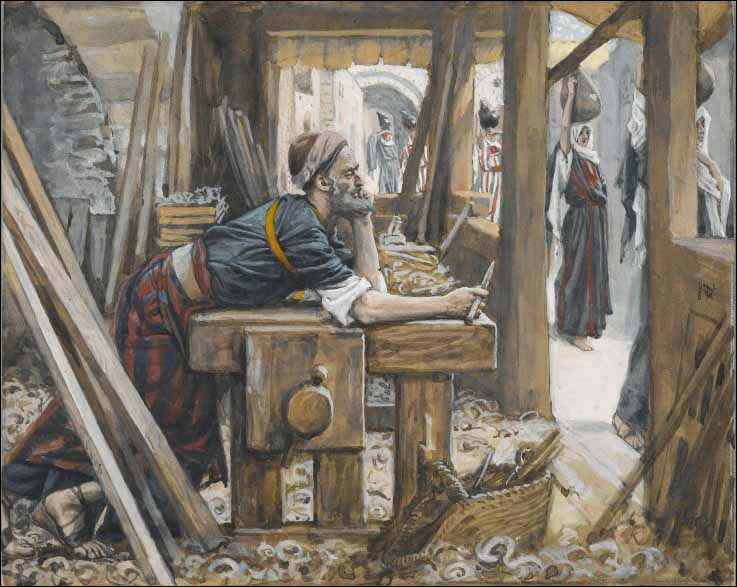 This is a picture of Joseph, an often overlooked character in the Christmas story, sitting alone with his thoughts and inner turmoil among the wood shaving of his workshop.

While his wife-to-be, faced with the wonder and surprise of new life growing within her, ran off to her cousin for support and to talk about all the things expectant mothers talk about, Joseph went back to his work, letting his anxieties linger somewhere deep inside to stew, churn, and go about their necessary process.

Though a key figure in this great story, he would never be the star (his step-son would naturally and for eternity fill that role). Joseph would assume the quiet roles of provider, supporter, mentor. The responsibilities any parent is called to.

Who’s the star of your story?

Many voices will tell you (and your ego would gladly agree), that you are the center of the universe. You are the star of your own story, the main character. While we all might be able to live a great story, I wonder whether assuming the lead role is a helpful posture.

Statistically speaking, very few of us will be the star in the spotlight. Just watch the hundreds of names that scroll by in the credits of any movie, only 1% of whom we saw throughout the film. And if we were asked, we probably wouldn’t prefer to be part of that 1%, but once in a while the recognition would be nice, wouldn’t it?

If stardom is a futile pursuit, then we might do better to learn from Joseph in the Christmas narrative. He may have been painted into the shadows of many nativity paintings and he might never have received the recognition he deserved, yet if he would have sought the spotlight, the story would have been ruined. His role as second fiddle made the whole song better.

How can you help someone else shine brighter?

Even the best performers, those who often are in the spotlight, have learned the art of making someone else the focus of their performances. Nancy Duarte exhorts public speakers to make their audience the hero. Yo-Yo Ma considers his role on the stage as that of a host, seeking to serve his audience with a wonderful experience.

Indeed, we seem to be better versions of ourselves when working from the shadows.

This Christmas, as you hear familiar stories and worship the star and the Son, steal a glance into the shadows. You might learn from someone who was there all along, quietly doing his humble and essential work.