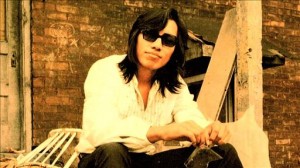 Last night I watched Searching For Sugar Man, the Oscar-winning documentary that tells the inspiring, surprising story of Rodriguez.

Rodriguez was a Detroit musician who recorded several albums in the 1970s. Though there were high hopes for this talented songwriter (compared to Bob Dylan), his albums absolutely flopped.

Well, in the USA they flopped.

While his record label dropped him and Rodriguez remained an unknown in America, copies of his album found their way to South Africa, where they caught on like wildfire. He became a hero, more popular than Elvis.

As his album spread throughout the country, so did the story of his alleged suicide.

Years later, (this is a spoiler alert, but the trailer spoils it nicely as well), South Africans discovered that their hero was, in fact, alive. Rodriguez went on to play several emotional sold out shows to thousands of his loyal fans in South Africa.

There’s something inspiring about our heroes who wear success lightly. The film shows Rodriguez, still the manual labourer, living a humble life out of the same house he’s lived in for 40 years. After his tour in South Africa, he resumed his ordinary life in Detroit, giving away most of the money made from the tour.

Reminiscent of Bill Watterson, Rodriguez seemed to be unshaken by both his initial failure, and his subsequent success.

You can watch the documentary on Netflix, and check out the trailer below.

“And you can keep your symbols of success
Then I’ll pursue my own happiness.” – Rodriguez