Make It A Story

I’ve been reading Frank Chimero’s The Shape of Design lately, and today read a story today that’s well worth retelling for what it teaches us about turning our messages into stories and connecting emotionally with our audiences.

As the story goes… One morning during his walk to work, David Ogilvy, one of the original “mad men” of advertising in the 50s and 60s, came upon a beggar. You could hear the loose change jingle in his tin can, which the beggar would occasionally bring to his ear to gauge his success, but rarely heard much. A sign hung around his neck, stating, “I AM BLIND.”

It was a warm late-April spring day in New York, and Ogilvy was in good spirits. He bent down and dropped in his change. He explained what he did for a living, and when the beggar thanked him, he asked whether he could make some modifications to his sign. Taking the sign, he added some words.

On his way home that evening, Ogilvy greeted the beggar, whose tin can was overflowing. Overwhelmed by his success that day, the beggar asked curiously what Ogilvy had added to his sign.

The sign now read, “IT IS SPRING, AND I AM BLIND.”

Amazing the difference when we turn our messages into stories that tap into empathy to affect our audiences.

One human life, closely observed, is everyone’s life. In the particular is the universal. Empathy is the feeling that most makes us human. – Roger Ebert (via Frank Chimero) 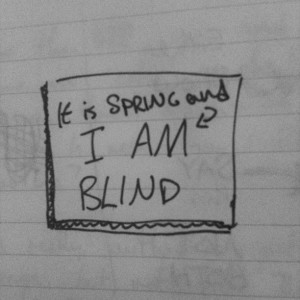 One response to “Make It A Story”