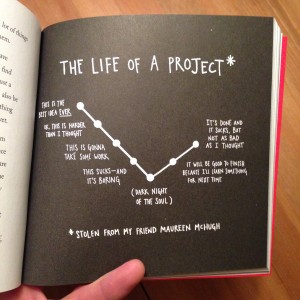 This is pretty accurate. From Austin Kleon’s “Steal Like an Artist”

Every creative endeavor is a journey, and a perilous one. Whether you’re raising a family, launching a website, making a film or writing a book, the path to realizing your creation is a roller coaster of excitement, fear, sweat and tears. Through all these highs and lows, some people persistent and realize their dream.

Into the Unknown In Ed Catmull’s

Creativity Inc, the founder of Pixar describes the journey to creating something new as a stepping into the unknown. In contrast to Michelangelo’s “every block of stone has a statue inside it and it is the task of the sculptor to discover it”, Catmull believes that the creative process involves bringing a new thing into existence, rather than discovering what’s already there. 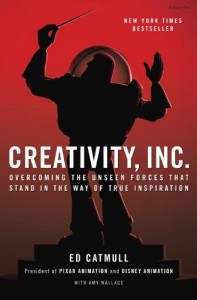 By definition, creating something new means you’re traveling to places no one has been before. It’s like stepping forward in darkness. A journey into the unknown is filled with uncertainty. How do you subdue the voices of fear and maintain the courage to move forward into the unknown? Catmull points to the importance of mental models to motivate creators. Mental models are metaphors that help maintain perspective while in the midst of the creative journey.

Here are some of the mental models used by directors in the Pixar team, some of which I’ve been able to relate to and found helpful in my creative process:

“When you grow up you tend to get told that the world is the way it is and you’re life is just to live your life inside the world. Try not to bash into the walls too much. Try to have a nice family life, have fun, save a little money. That’s a very limited life. Life can be much broader once you discover one simple fact: Everything around you that you call life was made up by people that were no smarter than you. And you can change it, you can influence it… Once you learn that, you’ll never be the same again.”

You and I have an incredible opportunity. We can choose not to sit back and watch the inevitable unfold. We can decide to do more than criticize and complain, resigning ourselves to cynicism. We have the opportunity to shape the future, to make a dent, to be part of something bigger than ourselves.

The creative process isn’t easy, but we all know that it’s worth it.