…the story of a man who saw three fellows laying bricks at a new building:
He approached the first and asked, What are you doing?
Clearly irritated, the first man responded, What the heck do you think I’m doing? I’m laying these darn bricks!
He then walked over to the second bricklayer and asked the same question.
The second fellow responded, Oh, I’m making a living.
He approached the third bricklayer with the same question, What are you doing?
The third looked up, smiled and said, I’m building a cathedral. 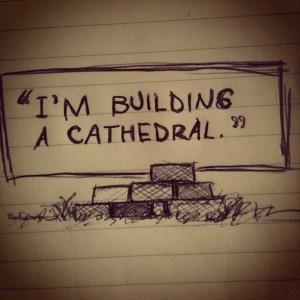