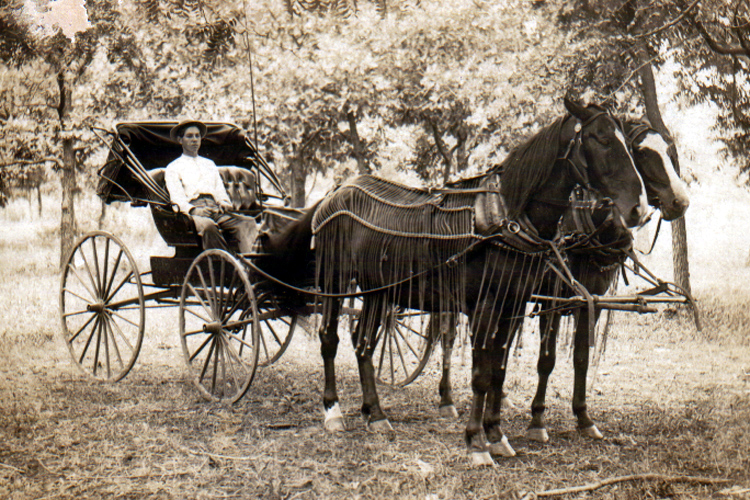 The term “genius” is normally reserved for leaders in a particular field. The forerunners who chart new ground or make new discoveries are dubbed “geniuses” by the rest of us who are following behind.

When you think of technological genius, you probably think of the kind of people who are inventing and creating at places like Google, Apple, or NASA.

But recently I stumbled upon not just one, but two writers who pointed away from the front of the pack when highlighting technological genius. Both Royden Loewen and Wendell Berry found what they called “technological genius” where you’d least expect it – in so-called “horse-and-buggy” communities of the Old Order Mennonites and the Amish. While this might seem crazy to you (it did to me!), I think that these writers and the communities they observed can teach us something about how we interact with technology.

Royden Loewen dubs traditional horse-and-buggy Mennonites “geniuses” in the title of his book Horse-and-Buggy Genius, which shares research on the struggles of today’s Old Colony and Old Order Mennonites in their struggle to resist the influence of the modern world. As a good researcher, Loewen avoids casting judgment – positive or negative – on these people as he shares their stories of fleeing modernity in pursuit of a life lived close to family, community, and the soil, but the title of his book suggest that these communities may have a strength for the rest of us to learn from.

It’s easy to dismiss these Luddites as outdated and backwards. In doing so you’d evidently stand in agreement with most of the modern world. But is their decision to avoid much modern technology made out of naivety or stubbornness, or is there some wisdom guiding their resistance?

Is there something we can learn from this little community of horse-and-buggy people?

Loewen admits that the Old Colony Mennonites, striving for a theology that is lived rather than spoken of, lack eloquence is describing their culture to outsiders. And maybe that’s why they’re often easy to dismiss by modern society.

Fortunately, we have other more eloquent writers who can help.

Wendell Berry, in his book The Unsettling of America, shares Loewen’s opinion of true technological genius. His book is a critique on our modern industrial culture, and how it has in particular affected agriculture (which, if you eat food, also affects you). Berry cautions is in our love of the future, the greed that drives much use of technology, and our uncritical adoption of any new technology without consideration of its effects on the earth and culture. He points to the Amish as “true geniuses of technology.” Their mastery of technology, he says, doesn’t come from being on the leading edge of invention, but in their consideration of the effects of technology on their culture, families, and way of life.

But it cannot be denied that [the Amish] have mastered one of the fundamental paradoxes of our condition: we can make ourselves whole only by accepting our partiality, by living within our limits, by being human — not by trying to be gods. By restraint they make themselves whole.

The way of genius

What can we learn from these horse-and-buggy geniuses? Is it time to sell the car and the iPhone and live off the grid? That sounds as extreme as it is unrealistic. But rather than dismiss these fringe cultures as crazy, maybe we can consider their approach to technology and let it inform us in our own contexts.

Here are a few takeaways I’ve been chewing on lately.

Any old grumpy person will tell you that “they don’t make things like they used to.” That may or may not be true depending on the context, but one thing we know is that our culture is in love with shiny new things, regardless of their quality. We also place a lot of importance and social pressure on keeping up with the times. (What, you only have an iPhone 7?!? That’s, like, almost a year old!) It’s worth considering the quality of a technology, rather than being seduced by its shininess.

2. Consider the side effects of technology.

When the first iPhone was unveiled, few of us who have imagined how attached to these little screens we would become in such a short amount of time. After a decade of coming to grips with the power of these little pocketable mini-computers, we are finally also realizing the potential damage these devices can cause to the fabric of our society. Who would have imagined ten years ago that we’d all be walking around starting at these little devices for so much of the day?

In a recent interview on the podcast Hurry Slowly, Craig Mod describes the internal chemical response of merely glancing at his phone. He compares it to a tank full of guppies that at the first scent of food come rushing for a hit of dopamine. Using technology wisely involves understanding the full effects of a technology, both positive and negative.

Technology is a tool.

No technology is inherently good or evil. True mastery of technology means we are able to show restraint in our use of it rather than letting the technology dictate how it is used. Social media can be used as a powerful connector of people, but can also be used to perpetuate loneliness and keep people from developing healthy relationships. How will you use the tools which you have been given?

Today we have more technology at our fingertips, more ability to connect, create, and help others than ever before. But with much power comes, how does that go again? Right, responsibility. We have a responsibility to use technology wisely, with restraint, with hopes of it bringing benefit to our own lives and those around us.

Maybe by using technology with restraint, wisdom, and true “genius”, we can make ourselves, our families, and our communities whole.