The Problem With Selfies

I get it. Sometimes you just have a great hair day, and there’s nobody to take the photo but you. Or you head out for a frosty run before your kids wake up, and you simply must capture your snowman face before it melts. Exhibit A: 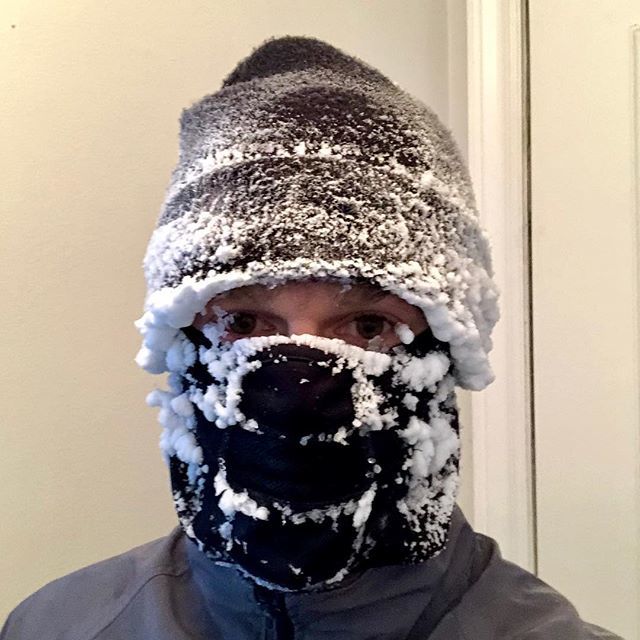 But have you ever noticed that there’s sometimes something missing in a selfie? Often the person in the selfie doesn’t look quite like themself. Sure, it’s their head, hair, facial features in the photo, but somehow they don’t look quite the same.

It’s something in the eyes…

When it comes to selfies, I often think of a quote from Tolstoy’s War & Peace.

“But the princess never saw the beautiful expression of her own eyes – the look they had when she was not thinking of herself. As with everyone, her face assumed a forced unnatural expression as soon as she looked in a glass…”

It turns out that our truest, best self is camera-shy. Whenever we look in the mirror, or point the lens on ourselves, it steps out of the frame. Humans are at their best, most beautiful, when their focus is on something other than themselves.

Brad Stulberg and Steve Magness echo this insight in their book Peak Performance, focusing an entire chapter on self-transcendence – the idea that we can perform at our best when our aspirations transcend personal gain and achievement.

“A large part of our ego’s role is to literally protect our “self.” It is our ego that tells us to shut down and flee when faced with threats. When we transcend our “self” and minimize ego, however, we can overcome the fears, anxieties, and physiological protective mechanisms that so often hold us back from achieving major breakthroughs. A whole new realm of possibilities emerges.”

A great example of this occurred in the running world in 2018 when Des Linden won the Boston Marathon. Coming off a difficult training year and facing miserable conditions on race day, Linden approached the legendary Boston race with the goal of helping others do well. First she waited up for fellow American Shalane Flanagan, breaking the cold winds to help her catch up with a group of leaders. Then Linden moved to the front of the chase pack to help them pull closer to the lead. At that point she found herself in position to win the whole race. And did! (Listen to her tell the story herself on The Rich Roll Podcast.)

By focusing on helping others, she ran one of her best races, and walked away with the winner’s title.

Bob Goff seems like a great guy because, as I hear, he lives a whimsical life, helps people, and likes kids movies. In his book Love Does, he talks about a rule he has in life: No capes. He borrowed this rule from a scene in The Incredibles, where a superhero suit designer insists Mr. Incredible’s suit not have a cape. For practical reasons, of course:

Goff goes on to explain, if we want to help people, it’s much more effective to skip the cape and simply help people. “Capes” in “helping people” terms are things like organization names, cool logos, shirts, and yes, selfies.

He also points to Jesus, who didn’t have a cape but helped a lot of people. Whenever Jesus did a crazy life-changing miracle, he disregarded the opportunity to leverage word-of-mouth marketing and told his friends to tell nobody what he’d done.

Because as Goff says, “Secretly incredible people just do things.”

I don’t know about you, but Jesus’ example stings a little. I like getting recognition when I help people. I don’t mind if a photo of me being “incredible” accidentally ends up floating around the internet, just to remind everyone (and mostly me) that I’m a pretty good person.

Here’s the challenge, if you choose to accept it with me: When we’re tempted to let others know (subtly, of course) how great and heroic we are, can we re-direct that energy towards helping make someone else’s day? Instead of asking for attention, can we give attention to someone else instead?

I still might take the odd frozen face selfie (because, I mean, look at that frost build-up!), but hopefully more often, I’ll point my internal lens towards helping someone else.

Because you look much more incredible when you’re focused beyond yourself.