Gumption is better than Hustle

We love to hustle these days, don’t we? Hustle is worn as a badge of honour, and is touted as the key to success by many a motivational speaker.

But I’ve having my doubts.

I’ve had seasons of hustle, where I worked through lunch, burned the midnight oil, and was out catching worms with the early birds the next morning. The thought was that if I hustled enough, I’d be able to keep with all those successful people out there who made the hustle look effortless.

But it didn’t last. For me, the hustle was unsustainable.

Kal Barteski shared this great painting that struck me during a period of hustle. 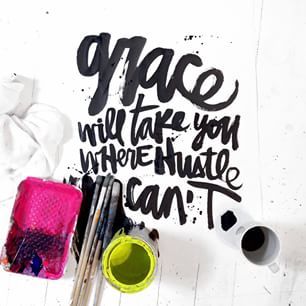 It made me wonder if all the talk about hustle had lead us astray. Maybe hustle wasn’t able to take me as far as I wished it would.

The word “hustle” comes from the Dutch word “hutselen”. I was first introduced to “hutselen” when I started playing card games with my in-laws (who happen to be Dutch).

“Hutselen” is the word they used for shuffling a deck of cards. Which is a great picture for hustle as well.

To make progress over the long-term, we need something more consistent and sustainable than hustle.

What a great word, no? Gumption. Similar to grit, it’s that deep-seated passion that keeps us returning to a problem day after day, season after season (long after the buzz of the hustle has worn off). It’s the energy that’s fueled by curiosity and a satisfaction in the work itself.

In Zen and the Art of Motorcycle Maintenance, Robert M. Pirsig introduces gumption as a key ingredient to, among other things, keeping a motorcycle running well.

“Gumption is the psychic gasoline that keeps the whole thing going. If you haven’t got it there’s no way the motorcycle can possibly be fixed. But if you have got it and know how to keep it there’s absolutely no way in this whole world that motorcycle can keep from getting fixed. It’s bound to happen. Therefore the thing that must be monitored at all times and preserved before anything else is the gumption.”

There are seasons of hustle, sure, but I’m starting to think that hustle as a way of life is over-rated.

Maybe we’d be better off focusing on building our gumption. Leaving the frenzy behind for the slow and steady forward movement.

Go to bed, get some rest. You might lose some momentum, but your gumption will still be there tomorrow.