Eat (and Read) and Run

I first heard about ultrarunner Scott Jurek in Chris McDougall’s Born to Run, where he joined a small group of daring runners in a 50-mile race with the legendary Tarahumara in the Copper Canyon region of Mexico. When a friend mentioned that Scott himself had written a book, I had to check it out.

In Eat & Run, Scott tells the story of his journey to becoming one of the greatest runners in the world. From his humble beginnings, running the snowmobile trails in northern Minnesota (which I could immdiately relate to), Scott went on to run (and win, repeatedly) some of the most grueling races on the planet, races of +100 miles in places like the mountains of California and Colorado, the Grand Canyon, and Death Valley. 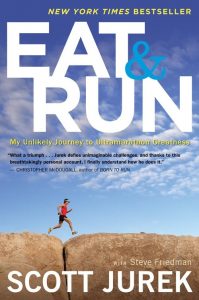 Along the way, Scott also learned about the importance of food as fuel and medicine for maintaining health. His journey lead him to adopt a vegan diet (and he shares some great recipes in the book).

Scott’s story taught me a lot about the importance of mental strength and discipline in running. He claims that anyone can run an ultra, but there is so much work that goes into training for ultrarunning. I also learned a lot about how all aspects of health and our being are connected. Running isn’t just a physical exercise, it requires spiritual, emotional, and mental strength as well.

Running is often used as a metaphor for life, and it often works. Recently I wrote about my quibbles with the “life is a marathon” idea, but what I learned from Scott is that actually, maybe I’d been thinking about running in the wrong way.

As I’ve set my sights on running my first marathon this year, this book provided timely inspiration for testing the limits of my body’s capabilities by running longer distances than I’ve ever thought possible. (If some crazy people out there are running 135 miles through the excruciating heat of the Death Valley, I should be able to handle a “mere marathon” Manitoba summer, right?) It also made me more aware of how I’m fueling my body, considering how the food I eat affects my overall health.

As I read Eat & Run, I noticed all the books Scott mentioned that contributed to journey. Reading obviously was an important part of his development as a runner and a person.

I started making a list of books Scott mentioned for further reading (not that he might endorse them per se, but they contributed in some way to his development), and thought I might as well include that list here.

Here’s a list of the books and major influencers he mentioned. (More were also included in the Footnotes of the book, but I didn’t record those.) Follow some of these rabbit trails, see what you can learn as well.

If you’re a runner (and a reader), check out Eat & Run to get excited about running! And I hear Scott’s got a new book coming out soon, so be on the lookout for that one as well.

Thanks, Scott, for sharing your story!